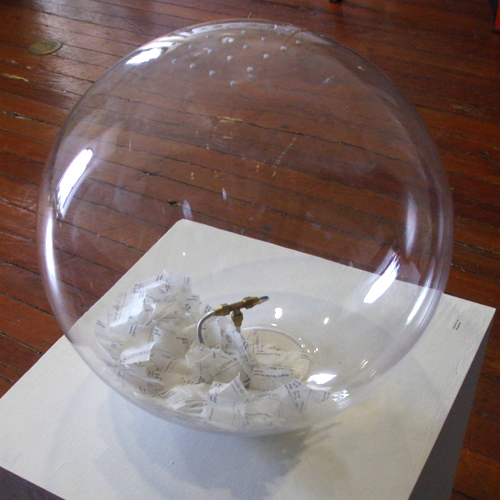 THE AESTHETICS OF THE IMMATERIAL

Like the divine, or like the corporate institutions of late capitalism, the internet is immaterial but inevitably imagined or visualized as a physical presence. The precise power of such entities is in their respective intangibilities and invisibilities, yet we seem incapable of imagining them as anything but embodied. To the extent that we require material artifacts (palimpsestic shrouds, say, or bureaucratic architecture) through which to conjure and stabilize our everyday immaterialities, so too is the internet necessarily materialized – or more precisely, spatialized. Pre-digital space and digital non-space converge in “homepages” and “desktops,” “browsing” and “connecting.”

Presented are two expeditions into that interstitial zone between the imagined materiality of internet and its loose referent, the “real.” 'Phishbowl' examines a personal encounter with identity theft. In the context of cybercrime, identity becomes mutable, flexible, and fluid; the idea of identity “ownership” is rendered farcical given the ease by which the online other is infiltrated, infected, or replaced. Yet that weightless transformation of data has the capacity to remake the material world and its subjects. A second work, 'Elite Network Awards,' attend to the online life of social hierarchy and value in the post-material field. The internet is often acclaimed as a great leveler, but the invisible infrastructures of the digital age – networks, profiles, and the like – generate new modes of scarcity and order that often find themselves reproduced in the material world.