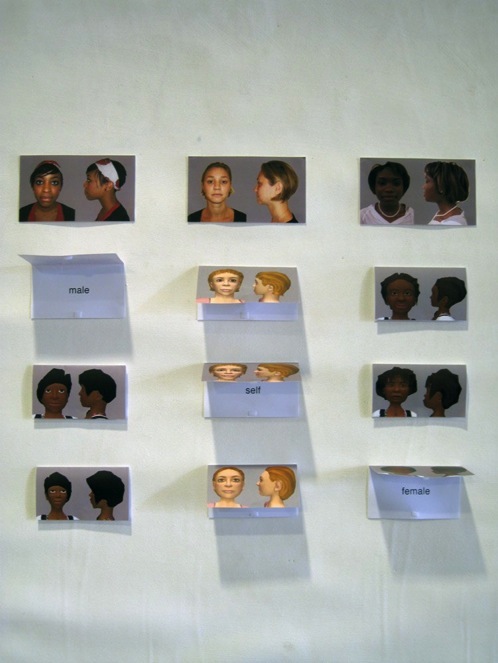 This is a study on the subjective and objective nature of visual self-perception. The face is the most unique form of our visual identity. We as humans know how to identify faces better than any other body part. Neurological evidence reveals that there are parts of the brain specialized for face perception and recognition. Biology confirms that faces are important physical forms that play a large role in our lives. From infancy we attach the identity of self to our face as we realize each of us is a being separate from other bodily forms and identities existing in the world external from our mind and body. We are at all times both physically and mentally connected with our body image, but also more importantly for this study, we are constantly stimulated by our visual reflection; reflection through a mirror or reflection through a photograph. I question the effect that the mind and body connection and continuous body image stimulation has upon on the self-knowledge and accuracy of our visual identity.

I seek to compare the face perception of the self to that of our observers. My study is a conducted experiment exploring the visual self-perception of fourteen women to the visual perception of her observers. The women under study were asked to create their own self-portrait from memory using the virtual reality program Second Life as an image-making tool. Once the self-portraits were completed, the women were photographed. Each photograph was then presented to a female and male observer who were unfamiliar with the woman in the photograph. The female and male observers were instructed to create a portrait of the woman in the photograph using Second Life. At the end of each trial there were three portraits representing each of the fourteen women under study. The images were placed in an online survey where surveyors were asked to choose the portrait they perceived as the most accurate portrait, identify which subject created each image(self, female, or male), and rate the level of accuracy and attractiveness.

I ask my surveyors to identify which image they perceive as appearing most like the photograph and to rate the level of accuracy for each portrait. In doing so, I hoped to find trends in my data that would show evidence that a particular type of observer (self, female or male) would exhibit having a more accurate perception than the other types of observers. My hypothesis is that the woman in the photograph who created a self-portrait of herself would have highest percentage of accuracy votes. My claim is based on the belief that we should have the most knowledge of our visual appearance because of the significantly larger amount of stimulation we have with our body image in terms of visually, physically, and mentally. I hoped that the results of my survey would clearly prove or disapprove my hypothesis.