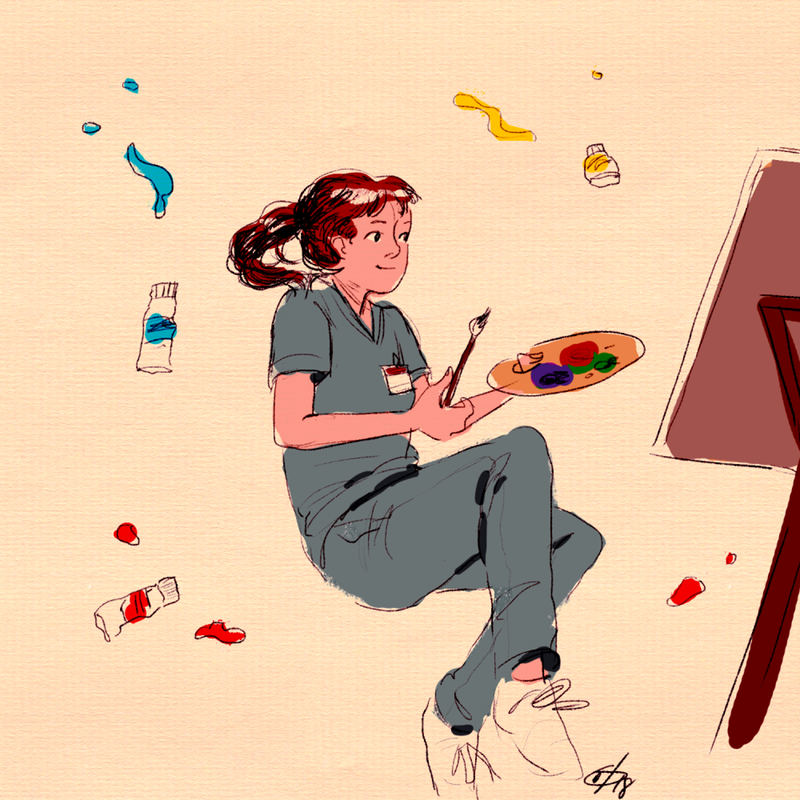 Who would have thought that the person cutting into your stomach could actually draw your stomach?

It’s a running joke just how preprofessional Penn is. The number of times we make fun of OCR and the memes we make of Goldman Sachs and McKinsey are almost countless. Being a bioengineering major, it would be hypocritical of me to say that being career–oriented is a negative quality. But in such an intense environment, there’s something to be said for the students who major in something different than their long–term goal. Visual studies majors who plan on going to med school may be hard to come by at Penn, but they are definitely a group to be admired.

One such student is Ellie Cheng (C ’19), a pre–med visual studies major who is currently the president of Penn Art Club. Ellie came into college knowing that she wanted to be pre–med, but also knew that she “didn’t want to do a major that was science–based, because I would already be taking so many science classes.” Then, in a meeting with her advisor, she found the visual studies major. For those unfamiliar with the major, it’s essentially an intersection between a number of fields, from the neurobiology of vision to the fine arts to the psychology of seeing.

While the choice to simultaneously take classes for visual studies and pre–med might at first seem like an incompatible pairing, Ellie said that each actually complemented the other. For example, her background in art helped her to enjoy organic chemistry, one of the notoriously difficult pre–med classes. She describes it as “a lot of visualizing and knowing mechanisms, and there’s multiple solutions to a problem, which I really like.”

Cathy Shang (C ’20), a fine arts major and chemistry minor, also liked the idea of incorporating fine arts into her biology and chemistry classes. She had always planned on pursuing a fine arts minor, but after an intense cell biology class, she realized that she “wanted to do art before going to med school.” A drawing class with Deirdre Murphy only solidified her choice. “Drawing was fine, it was just the basics. But Deirdre’s so inspiring because she’s just so into art.”

While introductory science and math classes can still have quality professors, those within the arts seem to be consistently more zealous. “I think the art professors here are so genuinely passionate about art. And the environment in the classroom is just a lot more collaborative and inviting,” said Cathy.

The thought of fulfilling all of the pre–med requirements in addition to those for a major that doesn’t overlap much can be daunting, but both Ellie and Cathy argue that it’s not only doable, but enjoyable. “It’s a really nice break from all of my more uptight and really intense pre–med classes,” says Ellie. And though some courses like photography or sculpture are known for their heavier workloads, Cathy says that she sometimes prefers her art homework because “it’s a lot more enjoyable than just straight up studying for bio.”

There’s something to be said for the way that the study of art informs medical practice. It requires repeated practice in what’s called close looking, or the idea that every aspect and detail must be engaged with and analyzed. When applied to medicine, this kind of perspective makes it easier to understand biological systems at large, because it focuses on the connection between smaller characteristics to broader ideas and meanings. Thinking ahead though, Cathy actually has some ideas of more direct ways to relate the two fields of study. “For example, there’s an art class here called biological design. I think that’s a really cool way of intersecting the two. I’ve also thought about plastic surgery.”

Though the combined art and science path isn’t one of the more popular choices for students at Penn, if not among the least popular choices, both Cathy and Ellie recommend studying something unrelated to pre–med for those who are interested in it.

“I always think people should try something new in college,” says Ellie, “and pre–med gives you a really good opportunity to explore something else.”

More than anything, Cathy sees it as a chance to widen one's perspective before completely focusing on medicine. “This is going to be the only time that you can major in what you actually want to major in. It’s like you’re getting a little bit of both, and I think that’s really important.”

The study of art requires the development of a variety of skills that are relevant to medicine, namely patience and visualization. And for those concerned more with their resumé, a major in the arts on a medical school application will definitely set you apart—but that shouldn’t be the only reason you do it. In the words of visual artist and film director John Waters, “Choose to study art for prestige or spite,” but also recognize that an undergraduate dedication to a passion field can help you grow more profoundly in both focus and contemplation, qualities that are too often forgotten in the typical pre–med path.